In an exclusive interview with The US Sun, Anne’s close pal and confidant Derek Warburton spoke about the 53-year-old’s passing and her hopes for her legacy.

On coming out with her then-girlfriend, Ellen, Anne’s friend said: “She did it for all the right reasons and she knew it. She knew what was right and I admired that.”

“The moment she decided to bring Ellen to the premiere of Volcano, risking everything, she changed the course of history for the LGBTQ community,” he explained of Anne’s decision. to bring his TV star girlfriend to the event.

Derek continued, “She changed my life in that moment. Together they gave me and millions of people permission to be who we are, with no excuses.”

“Even after, when Ellen didn’t give her the credit she deserved, Anne knew what she had done and it was her biggest achievement besides her two beautiful children,” added Derek, celebrity stylist and media entrepreneur. 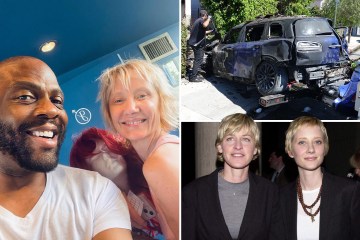 Responding to a question about Anne being out of the spotlight following his split with Ellen, he said: “It was hard, I wouldn’t say she left the spotlight, it left her.

“Ellen warned her not to come out like she did. Both showed up on the red carpet at one of Anne’s premieres.”

“She was so brave, it doesn’t seem like a big deal now because there are so many people who are proud,” the famed publicist and author added.

Most read in Entertainment

“When Anne did this, when Ellen did this, not many people did it, people were still living in the closet and Anne was brave enough to open that door, I think that will be part of her legacy,” Rob said.

Derek, who described Anne as “like a big sister”, said he and the star bonded through a tough upbringing and how they both had to overcome a lot of adversity.

“What doesn’t kill us makes us stronger. She and I have talked about all of this at length. You make a decision when you come from such trials. You sink or swim, you find great strength or succumb to weakness.”

“We both bonded to find great strength and that made us fearless. When you’ve been through it all, you know what to expect and when you find out you’ve survived it, what else are you going to be scared,” Derek added.

As The US Sun previously reported, Anne’s inner circle disputed statements made earlier this week by her ex Ellen, following the horrific accident the Hollywood star was involved in last week in Los Angeles.

Those close to Anne were apparently shaken by Ellen’s statements to photographers on August 9.

Cameras caught Ellen with a friend on Monday after Anne’s crash, in which she crashed into a house at over 90mph.

When asked how Anne was doing, Ellen answered the Daily Mail“We’re not in contact with each other, so I wouldn’t know.”

“I don’t want anyone to get hurt.”

A close friend of Anne called the statement “horrible”.

The pal said “What an awful statement, she should have said, ‘I’m heartbroken!

“Ellen knew she would be asked when she was coming out.

“And you wouldn’t ask her just because they were in a relationship – they were the first lesbian couple to make it out at a time when they weren’t. It was groundbreaking.

“It was absolutely shocking for Ellen to be so cold.”

They added: “She should have said, ‘I send him my best wishes; I wish him the best.

“It’s so easy to be human and to be nice, and Ellen wasn’t.”

A second source close to Anne echoed the sentiments of the first insider.

“It’s crazy, Ellen and Anne changed the world – they were the first couple to date.

“For Ellen to just say, ‘I don’t want anyone getting hurt,’ that’s awful.”

“I send Anne’s children, family and friends all my love.”

Anne was in a coma after last week’s wreckage when she crashed her Mini Cooper into a house, leaving her with serious injuries including anoxic brain damage.

Anne’s close friend, Nancy Davis, announced her death Friday in a touching tribute on Instagram: “Heaven has a new angel. My loving, kind, fun, endearing and beautiful friend @anneheche has gone to heaven.

“I will miss her terribly and cherish all the beautiful memories we shared. Anne was always the kindest, most caring person who always brought out the best in me.

“She was so supportive of anything she could do to help @racetoerasems and always said yes when she knew she could contribute something with her time, talent and creative genius to help find a cure for MS .”

“My heart is broken,” she added.

In Aurora, Ohio, Anne rose to fame after portraying twins Vicky Hudson and Marley Love in the late ’80s soap opera Another World.

His career reached new heights in the late 1990s with roles in Donnie Brasco, the disaster film Volcano, the comedy Six Days, Seven Nights and the slasher horror film I Know What You Did Last Summer.

In 1997, his relationship with Ellen became the subject of widespread media interest.

What to do if your credit card debt increases