When it comes to the modern transfer market, there is often an insatiable appetite for new faces.

Rangers have done a less glamorous but important job of retaining players on new contracts, including Connor Goldson, but while they have specific targets for key first-team positions and are hoping to finalize a deal with the Greek team PAOK for Croatian international striker Antonio Colak, by far the busiest revolving door at Auchenhowie has been the one leading to the academy.

When the club unveiled the additions to their Under-18 squad on Thursday, the list of new names was long enough to include a brand new youth squad.

Rice is considered a No. 6 but can play defense. He has a great left foot and is in the mold of Charlie Adam with his passing range. He was not initially given a place at the Scottish FA Performance School five years ago because he was seen as lacking in athleticism, but Rangers believe he has developed that and has the potential to become the complete physical package.

There is enthusiasm for the quality of the three London-based players – Mulindwa is said to be stylistically similar to Glen Kamara and Nsio is a flair player whose lanky physique allows him to go from club to club.

The English clubs’ contracts expired on Thursday June 30, so new signings are expected in the coming days.

Zak Lovelace, who became the second-youngest player in Championship side Milwall last December when he made his debut aged 15, is set to join the ranks of new signings at Rangers as part of a deal of around £100,000 as they close to signing Cameron Bell, a Scottish midfielder who was recently released by Everton.

That means Rangers have signed, or are in the process of adding, a dozen players aged 16 (Lovelace had his birthday in January) and 18 – a space that has come to be commonly referred to as “emerging talent”.

Only five existing players have made the transition to the professional phase at Rangers, which means there was a need for massive recruitment this summer in this age group. The club have been aware of this for some time thanks to their succession plan, which starts as low on the academy ladder as the Under-14s.

The latest intake is the final age bracket which predates significant changes to the structure of the academy, which is why it is expected that far fewer players will be signed from outside next summer. .

Rory Wilson would have been another player to rise through the ranks, but the 16-year-old striker signed for Aston Villa from former Rangers manager Steven Gerrard after lengthy negotiations that resulted in a fee agreement.

Rangers would prefer to retain their best talent from this age group, but planning the strategy to counter any losses began more than two years ago when the United Kingdom left the European Union. With English clubs no longer able to sign European players before the age of 18 after Brexit, it was inevitable that there would be a significant increase in the number of Scottish players they would target when they turned professional at 16.

A player starting at that age, like Billy Gilmour did when he left Rangers for Chelsea aged 16 in the summer of 2017, tends to be seen as a loss for Scottish clubs. It’s become so commonplace now, however, that Rangers have had to learn how to counter in the English market.

They continue to look at the best of the rest in Scotland – doubly important with Rangers B playing in the Lowland League, where rules require each starting XI to have seven Scots – but sweeping talent from England by maximizing the cross-border market has given them brought in Joe Aribo, Calvin Bassey and Charlie McCann for greatly reduced fees.

Scottish clubs only have to pay a development fee based on the FIFA regulations matrix, while players moving between Tier 1 clubs in England (in the FA domestic categories) would require a much larger sum .

Rangers’ youth recruitment is led by David Stevenson, with the club’s longtime Northern Ireland man Phil Cowan and former academy player Max Ashmore. Several scouts have been added on a part-time basis to cover the English 16-23 market, while a new scout has joined specifically to look at the London market.

London continues to develop as a hotspot for young prospects with so much talent emerging outside of traditional club academies – as shown by the fact that Rangers have just signed three private players. These programs are all interconnected – as well as the former Kinetic Academy in Aribo, with whom Rangers have a relationship and whose players were offered trials last year – which is why Cowan regularly visits the south .

Wilson’s move to Villa is worth a guaranteed £350,000, with add-ons that could take it into seven figures. However, this fee doesn’t just accrue to the Ibrox first team, as Rangers have also committed to investing below their senior squad.

Rangers use the term ‘A’ players for those like Alex Lowry and Leon King, who are exceptional at youth level and have been designated for transition to the first team. Wilson was one of them, given his goalscoring record, but it is believed that by getting a fee of this size the club can potentially replace an ‘A’ player with four or five. 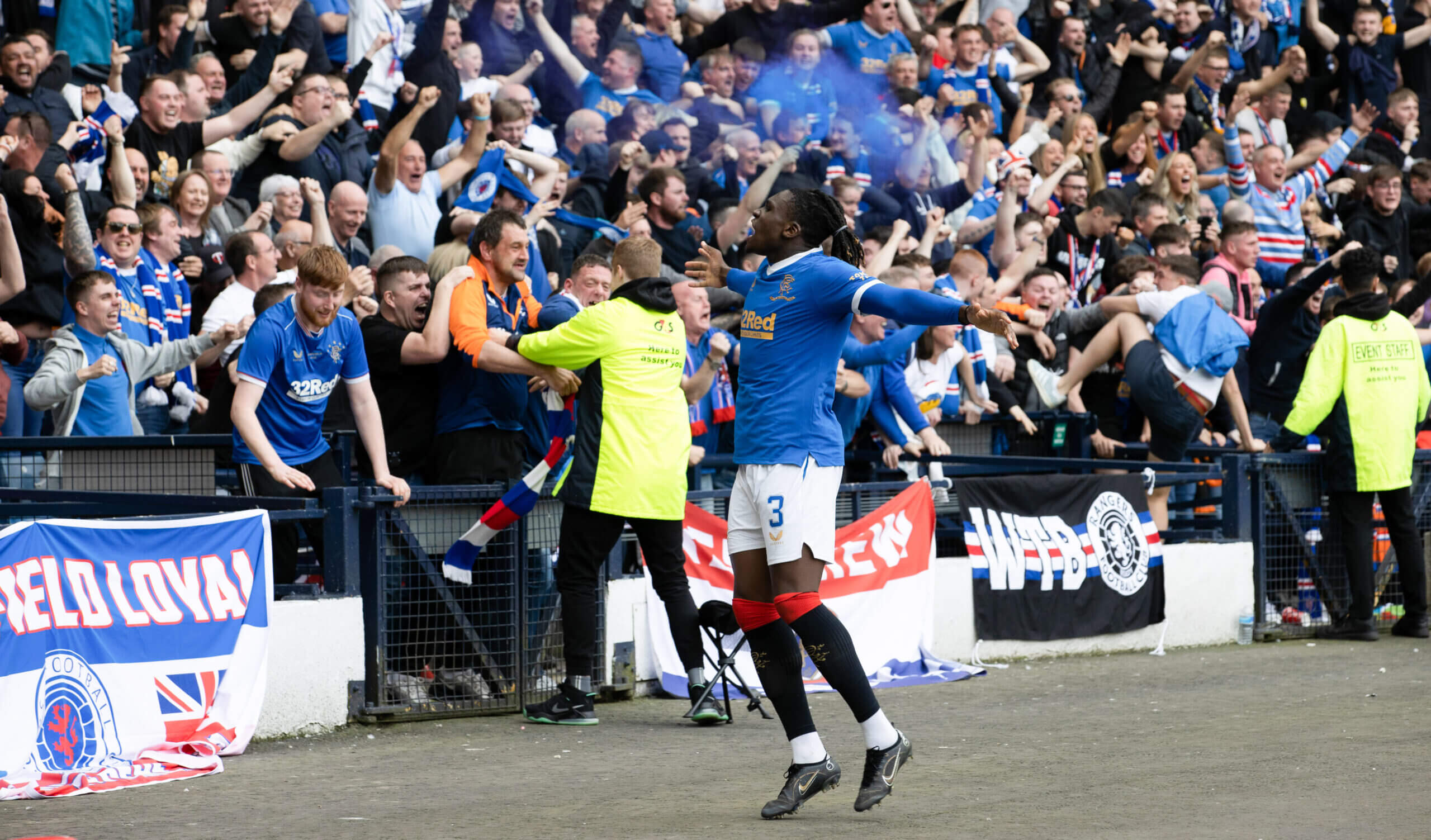 As Bassey’s £230,000 move from Leicester City in 2020 shows, it only takes one major success for him to repay the investment many times over. This is why building a reputation among clubs and agents as a positive destination for players has been a priority for Rangers.

There is always a risk that cross-border transactions may not go as planned due to factors outside football.

Malcolm Ebiowei spent 18 months at Rangers after spells at academies at London clubs Chelsea and Arsenal, then joined Derby County last summer and broke into Wayne Rooney’s first team as they unsuccessfully battled the relegation to English third tier. He has just joined Premier League side Crystal Palace, signing a five-year deal.

COVID-19 restrictions have not helped the integration of some young England players, but some families are believed to be moving to Scotland with them to help provide a support network. Although the Rangers arrange homestays, they encourage this if it is financially feasible. The club’s under-18 coaches are also traveling to meet players’ parents to better understand the environments around some of these new arrivals.

The focus is still primarily on ensuring that players brought in at a young age can reach first-team level, but that may never be the case for the majority of young players at any club.

As well as doing a lot of business on revenue, Rangers have looked to better generate money through the academy, beyond the £12million fee for Nathan Patterson, who became the club’s record sale. club in January when he moved to Everton.

There are different profiles of players leaving the club.

The most obvious group are players who manage to break into the first team and then get a big hit. Lowry and King are the next two Rangers hoping to fall into that category.

The second type are early developers, like Gilmour, Wilson and Adedire Mebude, who joined Manchester City in 2020. These players will have Premier League clubs everywhere before they even reach the age where they can secure a professional contract. Rangers are not entitled to any transfer fee if these youngsters never sign such a deal with them, but recruiting clubs generally want to do it fairly, with additions and sale clauses that will generate revenue.

Then there are the players who, for various reasons, aren’t deemed good enough to make it, but find homes in the English game. Nathan Young-Coombes, Brian Kinnear, Dapo Mebude and Ebowei are recent examples at Brentford, West Ham, Watford and Palace.

You also have those who are good enough to enjoy a career at a decent level but aren’t quite up to Rangers standards. Jamie Barjonas, Daniel Finlayson and Kyle McClelland rose to the top of the academy system before being allowed to move on to other Scottish clubs. James Maxwell rejected a contract with Rangers in the summer and is now looking for a new club.

This is why the loan system is useful. For those still seen as having a chance of qualifying with their parent club, the decision of where to go to gain experience is a big one, but it all veers away from team spirit towards the individual.

Stephen Kelly went to Salford City of League Two on loan in January after spells at Ayr United and Ross County, while Josh McPake was tapped at Harrogate Town, Morecambe and Tranmere Rovers in the third and fourth tiers of England over the past two seasons rather than Scottish teams as it is seen as a better way to earn higher development fees.

When it comes to players leaving at the end of their contracts, negotiating the fee and sell clause is a balancing act.

If there is still a belief that they can continue to fulfill their potential, accept a lower fee in a deal with a higher sale, up to 50%, as in the case of Zak Rudden at Partick and McClelland at Hibernian makes sense.

The Rangers generated nearly eight digits in the period following Gilmour’s move to Chelsea – income which helps repay the club’s investment in the academy and accelerates the recruitment drive to ensure they remain among the UK’s emerging talents .